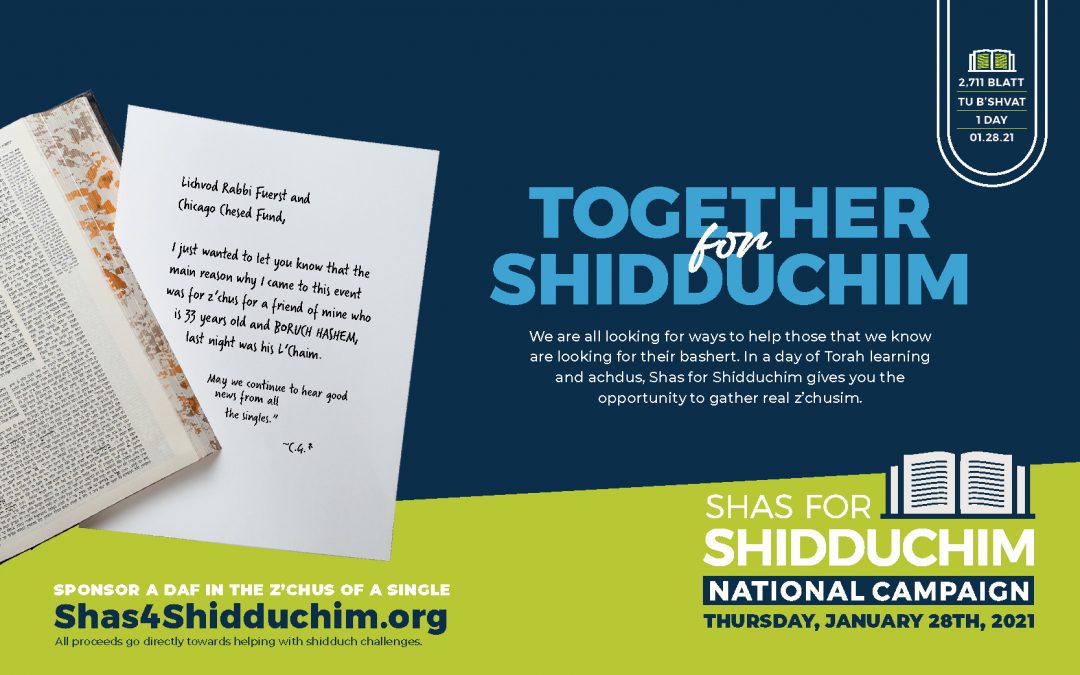 A POWERFUL DEMONSTRATION ON BEHALF OF KLAL YISROEL’S SINGLES

The struggle of finding shidduchim is not at all unique to the Chicago community, but their approach towards it is.

On January 28, 2021, hundreds of people from across the country worked together in a remarkable display of achdus with one cause: to help singles find their basherts.

For the fourth year, Shas for Shidduchim, a Chicago Chesed Fund fundraiser, arranged for the entire Shas to be learned in just 24 hours on Tu B’shvat, a day mesugal for shidduchim. Donors sponsored dafim as a z’chus for singles to find their zivugim, and lomdim learned on behalf of those people.

The national campaign was endorsed by many Rabbanim, including Maran Rav Chaim Kanievsky shlita. In a written message to Shas for Shidduchim, HaRav Kanievsky stated that there is no segulah like limud torah, and in the z’chus of the limud torah and tefillos, Hashem should send everyone their zivugim. Rav Kanievsky concluded with a bracha that the lomdim who participate in this great venture should see bracha and hatzlacha in all areas of their lives.

Shas for Shidduchim benefits singles in three incredible ways, corresponding to the three pillars that Pirkei Avos tells us the world stands on: Torah, Avodah, and Gemilus Chasadim.

Torah: Hundreds of lomdim fervently work together to complete Shas in one day.

Avodah: The lomdim storm the heavens on behalf of the singles whose names were submitted by donors.

Gemilus Chasadim: The proceeds of the campaign help Chicago Chesed Fund assist singles facing the many challenges that the shidduch world presents.

The money raised from Shas for Shidduchim benefits Chicago Chesed Fund’s matchmaking initiatives which are provided at zero cost for its beneficiaries.

The hard work of the people at Chicago Chesed Fund and the mesiras nefesh of the Shas lomdim pays off and many people have seen incredible yeshuos. In fact, the community organization celebrated its 244th shidduch the night before the Shas for Shidduchim siyum!

The long-anticipated siyum was viewed by hundreds nationally. Dedicated l’iluy nishmas Nachum Langsner, z”l, the event began with opening remarks from Rabbi Zvi Zimmerman, mashgiach ruchani of Skokie Yeshiva (Hebrew Theological College). R’Aharon Langsner was then mesayem on behalf of the excited lomdim. The hadran was met with resounding shouts of “Mazel tov!” from hundreds of homes across America, as mesaymim and their families celebrated this great achievement.

After the siyum was made, HaRav Shmuel Fuerst addressed the viewers with divrei bracha, which was followed bu a riveting speech delivered by guest speaker, HaRav Yitzchok Margareten shlita, Manhig Ruchni of Shomer Shabbos Cleveland and Menahel of Yeshiva Derech HaTorah in Cleveland.

The program concluded with a siyum on mishnayos made by Dr. Yigal Yahav, in memory of his brother, Mr. Shalom Yahav, z”l.

On Tu B’Shvat, the excitement was palpable in Jewish Communities across the country as hundreds celebrated the completion of the entire Shas in one day. Shas for Shidduchim united Jews of all backgrounds for the solitary goal of supporting the singles who are in need of a yeshua.

In the z’chus of Shas for Shidduchim, a catalyst for immeasurable hours of learning and tefillos, we will bez”H be zocheh to see yeshuos and celebrate the shidduchim of all Klal Yisroel’s singles very soon.